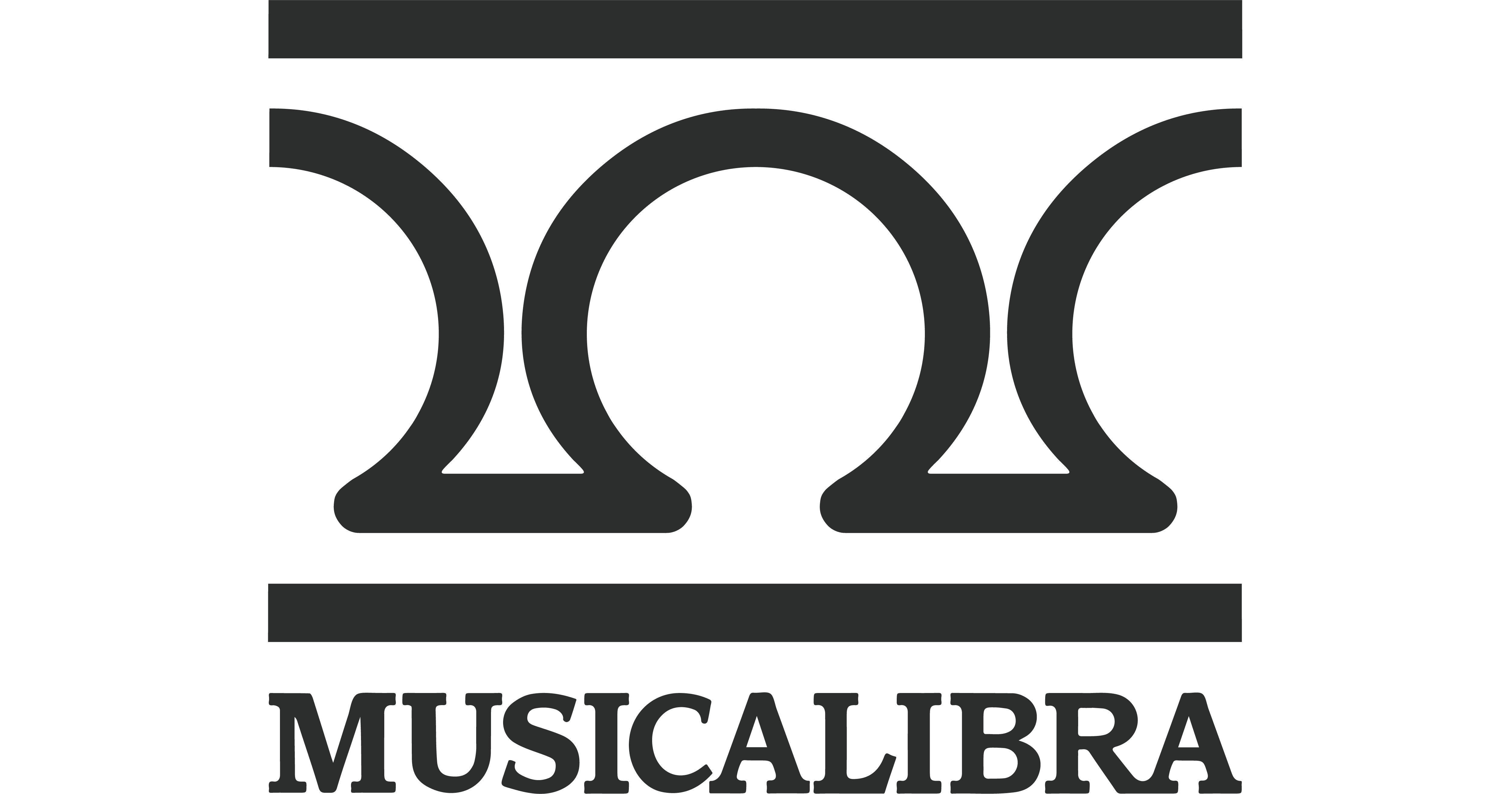 The Theoretical Analysis of Beethoven Piano Sonata No. 8 in C minor, Op. 13

Ludwig van Beethoven was a composer who inherited the classical tradition but his music was not limited to the form and technique of classical period. He had his own unique style of music and composed pieces of various genres throughout his life. He attempted to overcome the musical limitations of classical period on his music.

Beethoven composed 32 piano sonatas from 1795 to 1822 and these works can be classified under three periods. His early sonatas were influenced by the traditional classical styles of Haydn and Mozart. He tried to add content outside of music and make his music free from classical forms in his mid-term sonatas. The latter work of Beethoven is the convergence styles, the mixture of traditional classical techniques and new romantic techniques.

His piano sonatas have autobiographical elements reflecting his human spirit, will and emotion, while compressing the artistic development of his music. Beethoven's sonata serves as a link between classical and romantic periods and still serves as an important musical cornerstone for later composers.

The representative piece among his early sonatas is No. 8, Op. 13. The publisher titled this work “Grande Sonate Pathétique,” and it was dedicated to his patron Karl von Lichnowsky. This sonata consists of three movements and the first movement begins with a long introduction of Grave which is slow. It was the first attempt in piano sonata to use longer introduction than ever. This sonata is characterized by the very short development and its tragic first movement.

The introduction part is the first 10 measures of the movement where slow and majestic main motif is presented. Three notes moving upward(X) and two notes moving downward(Y) are the key elements of the introduction, which plays an important role to keep the balance throughout the piece.

The theme is introduced on the first four measures in c minor key. This part makes a sequence consisting of antecedent phrase(mm. 1) and consequent phrase(mm. 2). The antecedent phrase goes from the tonic to dominant chord, and the consequent phrase proceeds the other way around. The repetitive dynamic fp is the characteristics of Beethoven’s music, which is used to make the effect of a sudden reversal. This passage gradually ascends and modulates to g minor at the third measure. Then, it expands and prolongs the motif until another modulation to Eb major through short and strong rhythm. 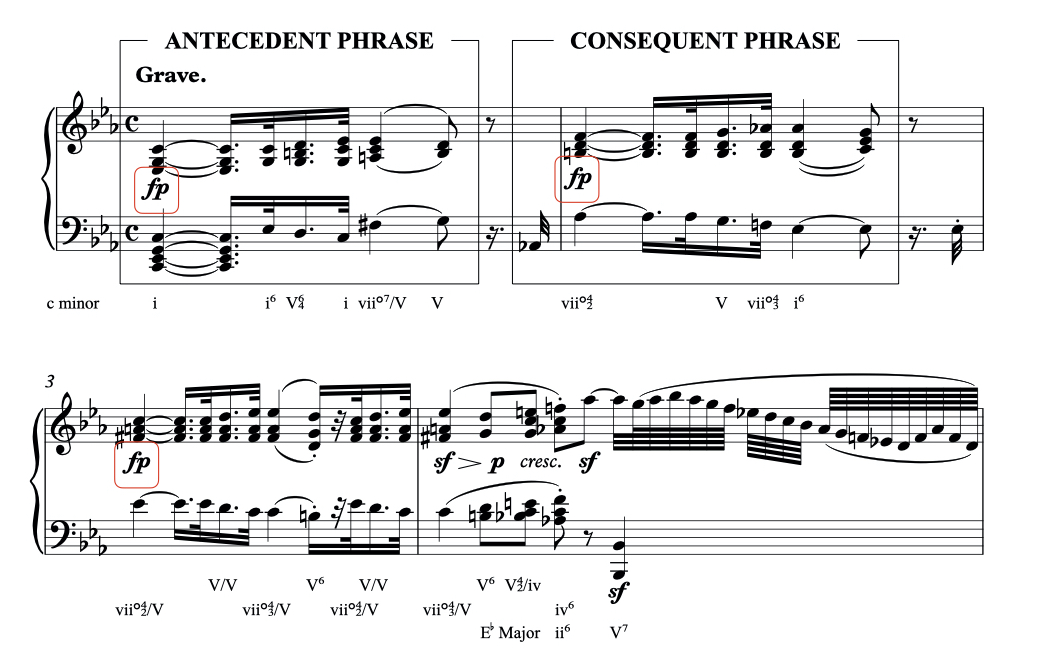 At mm. 5, the contrast effect of p and ff is shown prominently as the main motif and dotted rhythm of upper voice expands to the higher octave. Bass makes a downward conjunct motion from Eb at mm. 5 to F# at mm. 7, and the key modulates to vii° in c minor where F comes(mm. 5). The reduced main motif is going upward from mm. 7 to 8 on the upper voice, and the lower voice is going downward making contrary motion. 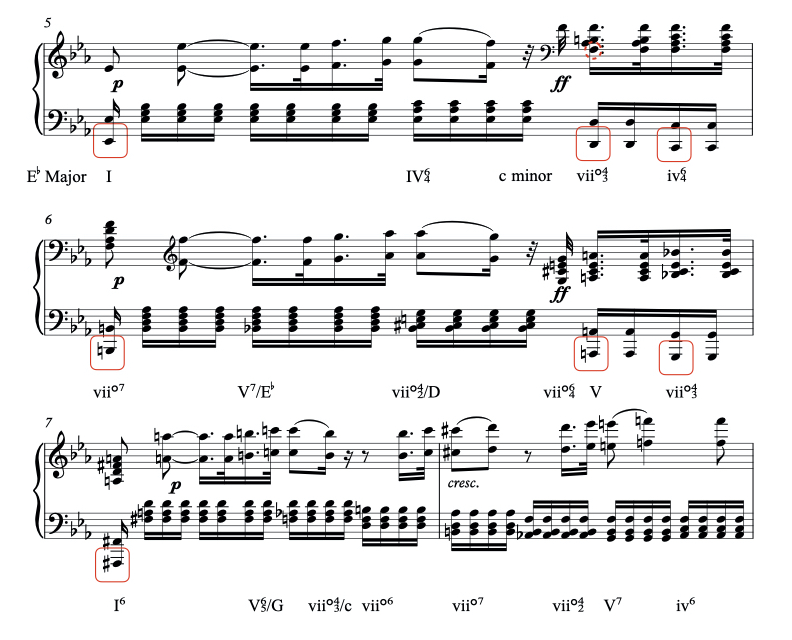 At mm 10, the introduction ends with a half cadence in c minor. 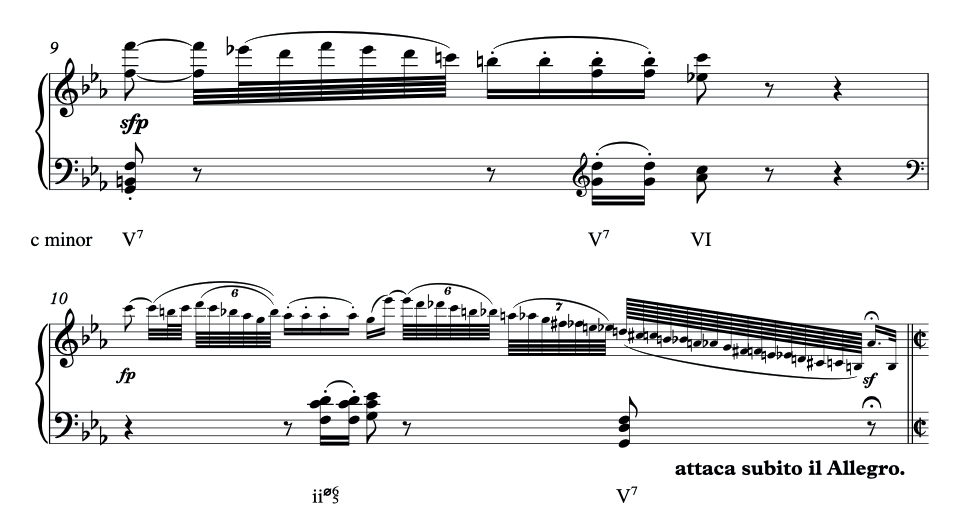 From mm. 11, The first theme of exposition begins in c minor. The theme consists of 8 measures which can be divided into two parts. The upward motion in the first 4 measures is tensive while downward motion in the following 4 measures is relaxative. This motif is developed by imitating X and Y of introduction part. While the first theme maintains on the pedal point tone of tonic, the melody of upper voice is going upward chromatically, then going downward with harmonic changes. This phrase is a transition part going over to the second theme where modulations often occur. It can be divided into two groups, group 1 from mm. 27 to 34 and group 2 from mm. 35 to 50. The first group shows broken V chords that determine c minor key. 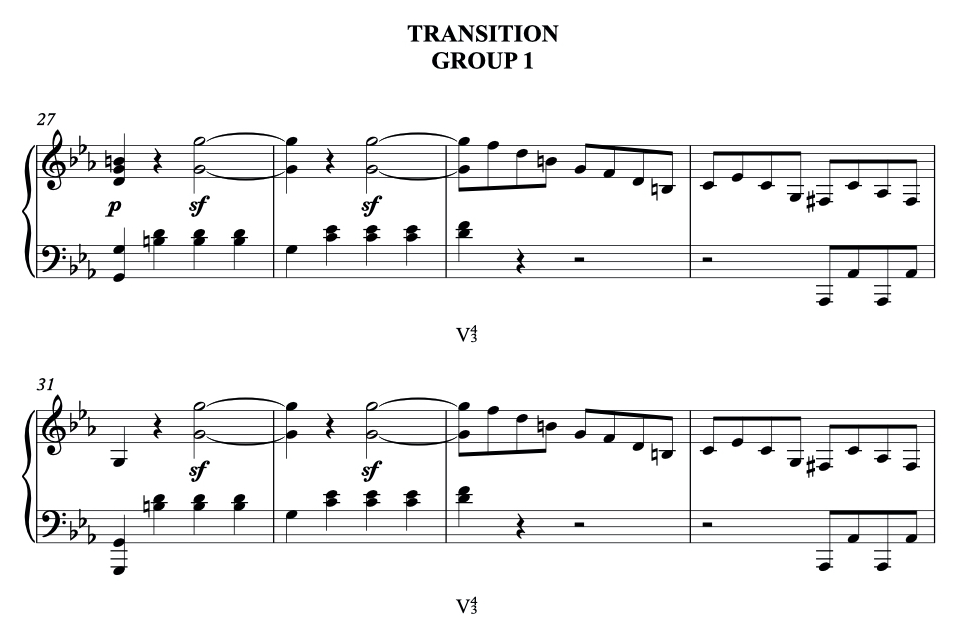 The second group is a phrase that has pedal point tones, consisting of four successive sequences. Y element in the first theme becomes a pattern of sequences and prepares for modulation to the second theme. It continuously brings out the dominant chord of eb minor before reaching the second theme. 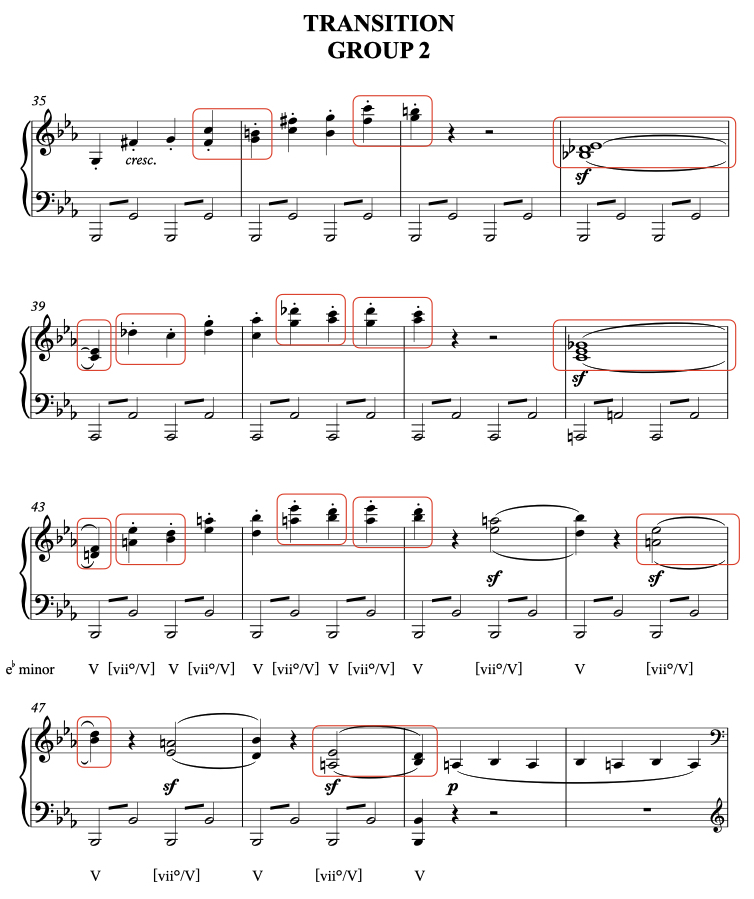 A typical feature in the early sonata is the second theme having the relative key or dominant key of the first theme. But the second theme of this sonata is in eb minor, which is the chromatic mediant modulation of the first theme. This is frequently used by Beethoven, as he did the same in his piano sonata No. 21. The first figure of the second staff is developed by the figure used in the transition part. Unlike the first theme, it presents lyrical melody with added ornamentations. The main melody also develops Y in the introduction using ornamentations.

The key begins with eb minor, then goes to the neighbor key Db major. 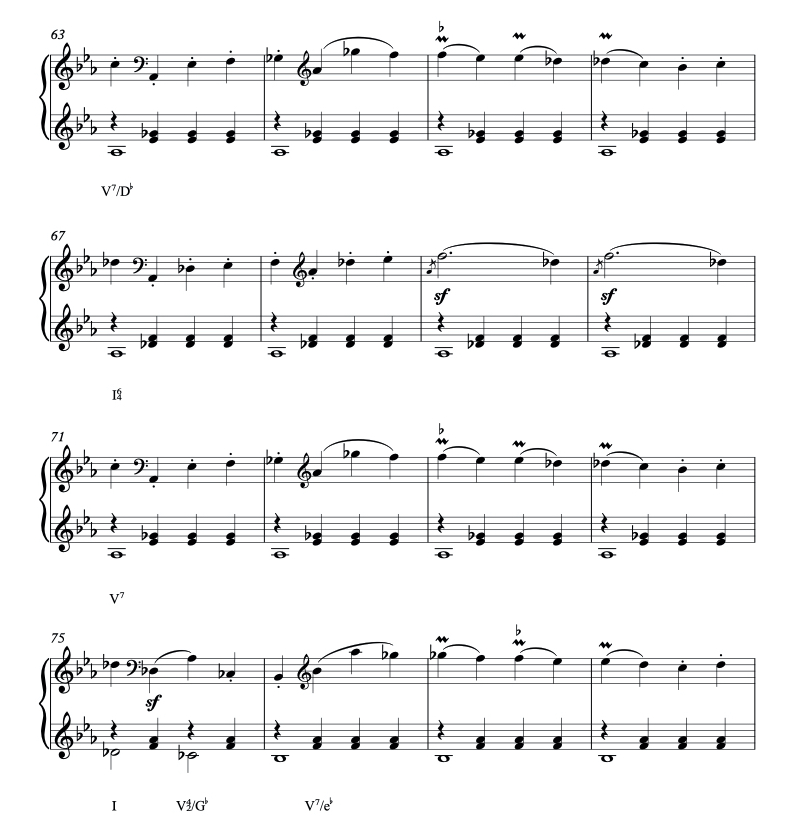 It comes back to V in eb minor at mm. 76 and modulates to the relative key, Eb major. 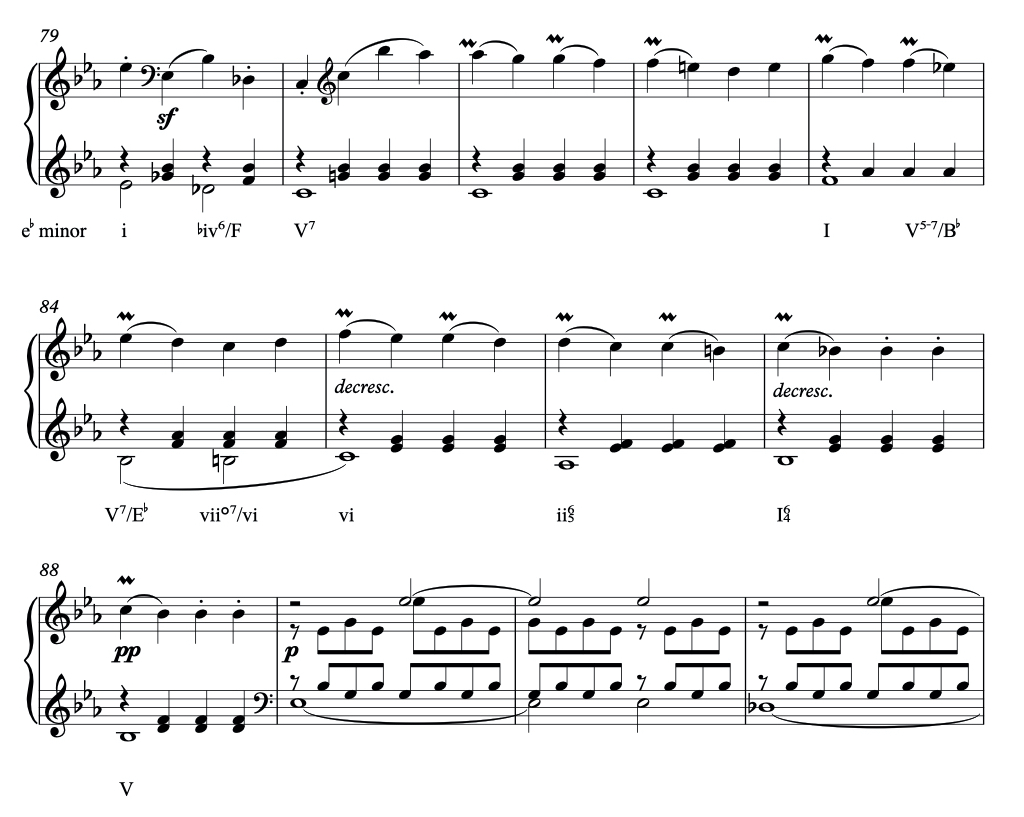 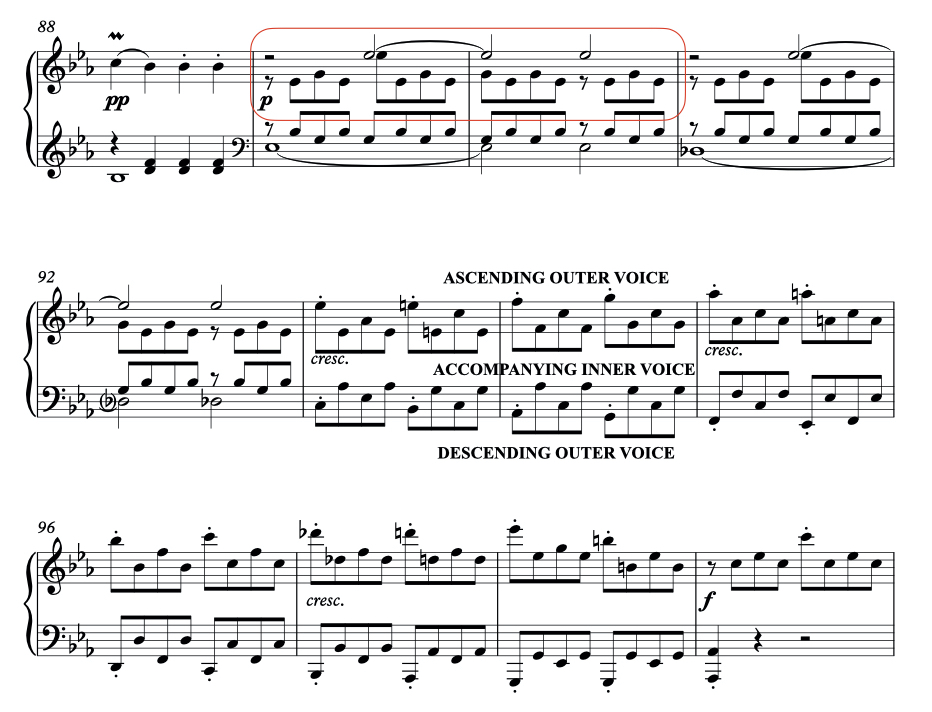 A new figure comes after sequence, which repeated the syncopated rhythm twice. It consists of outer voices moving in the contrary direction with staccato and accompanying inner voice. The melody expands the range as the upper voice ascends with the mixture of chromatic and diatonic scale while the bass goes downward.

In this codetta, the melody of upper voice gradually descends on the same figure presented in the second subject. 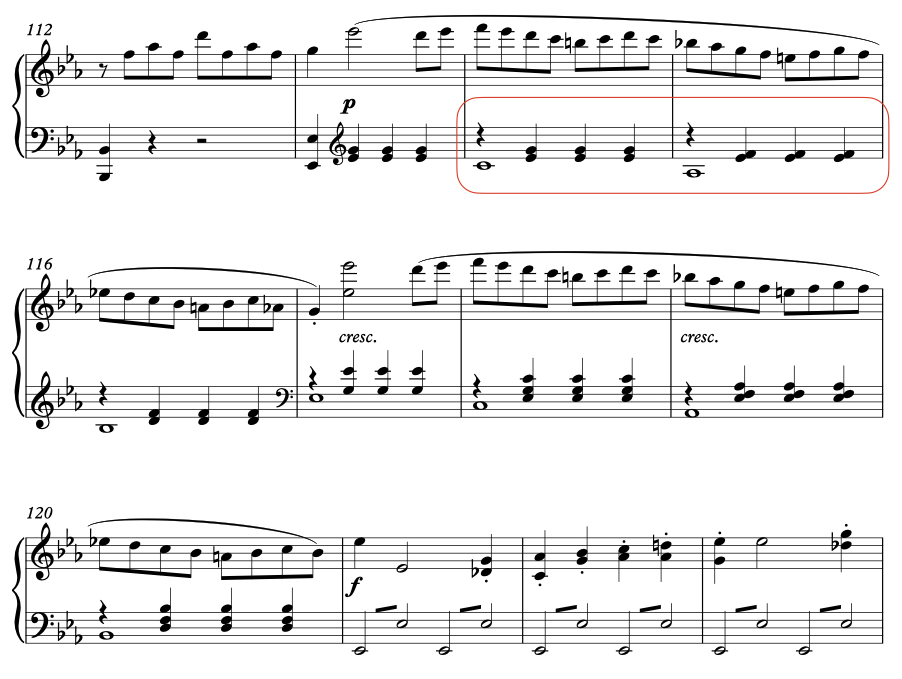 The melody in four measures is repeated twice at mm. 113 and 117, then goes to the latter part of codetta which keeps the characteristic of the first subject. Fast moving tremolos on the second staff gradually descend until reaching F#. The first volta finishes in c minor, and the second volta modulates the key to g minor. The chord progression V - i in g minor makes a connection to the development section. 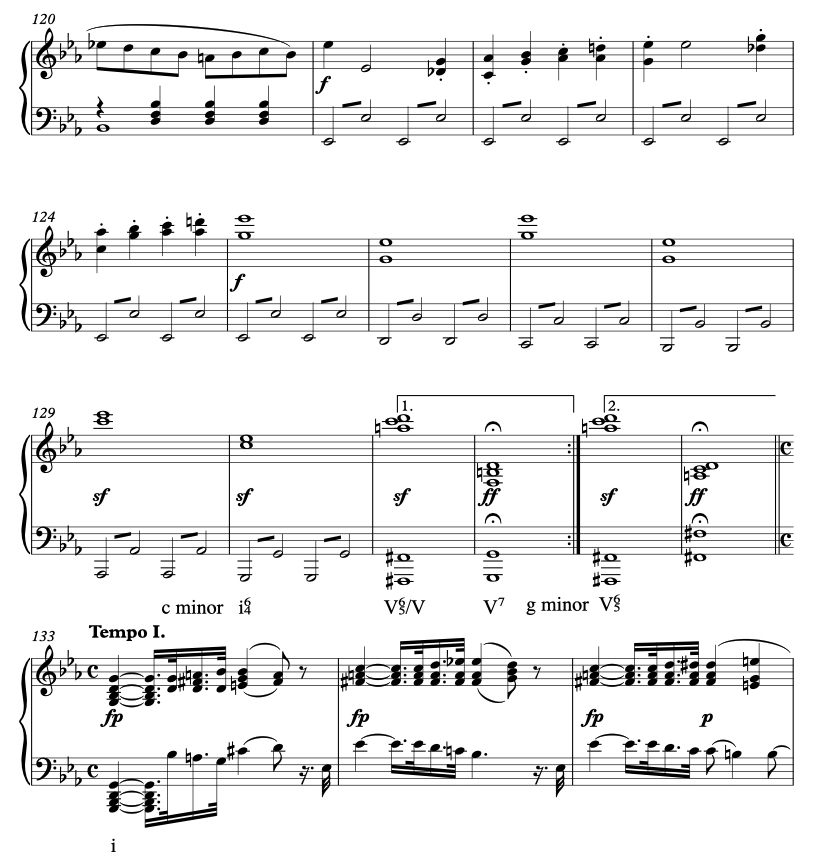 The development section can be divided into three groups. The first group begins with the motif from the overture of the introduction as a bridge. It modulates from g minor to e minor, and ends with the dominant chord. 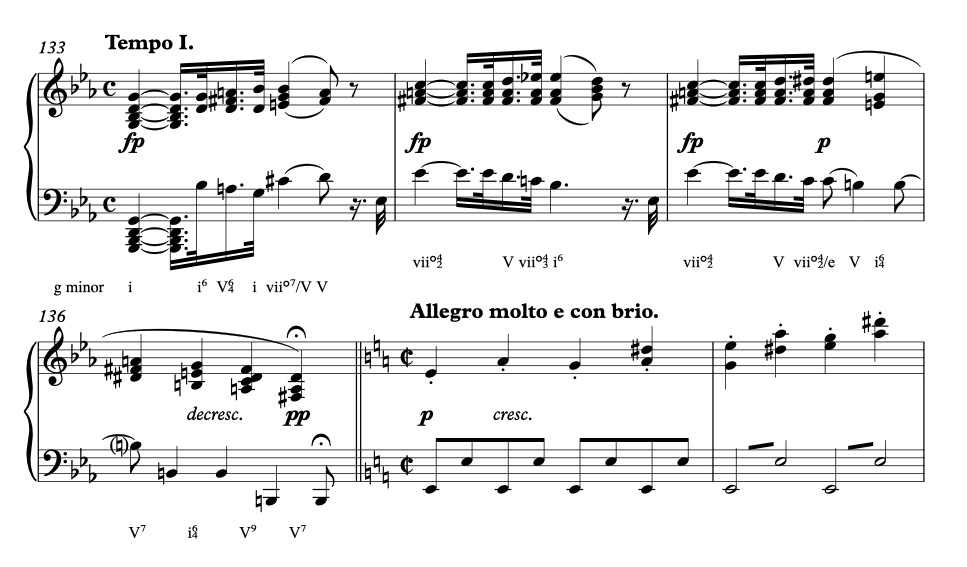 The second group is from mm. 137 to 166, which is developed by the mixture of elements of the first subject and second subject. Through the chromatic modulation, the key changes from e minor to g minor, and g minor to f minor. Elements from the first subject and second subject are used at mm. 137 and 139 respectively. Those from the introduction part are also used from mm. 140 to 141 by expanding the rhythm. 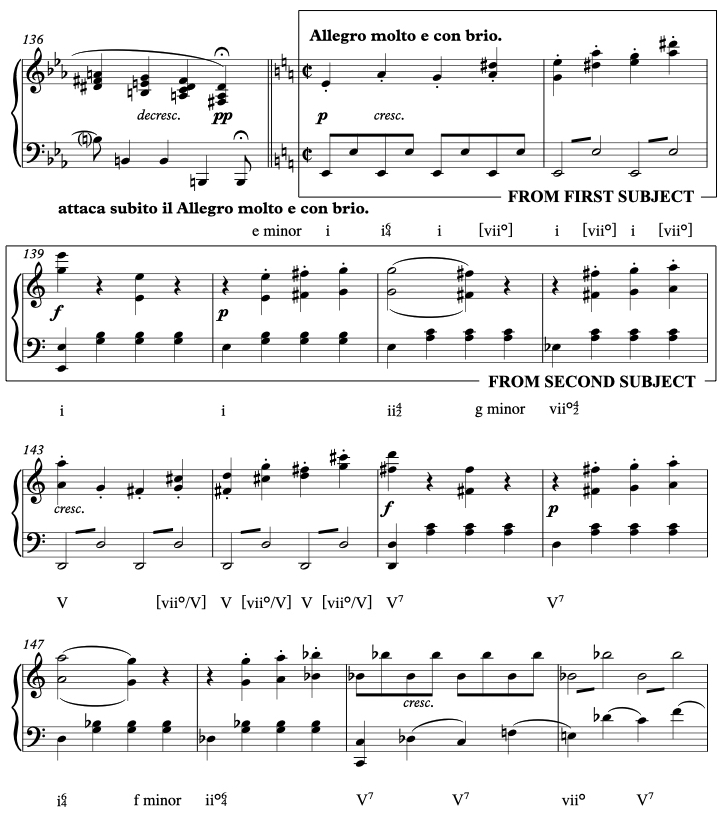 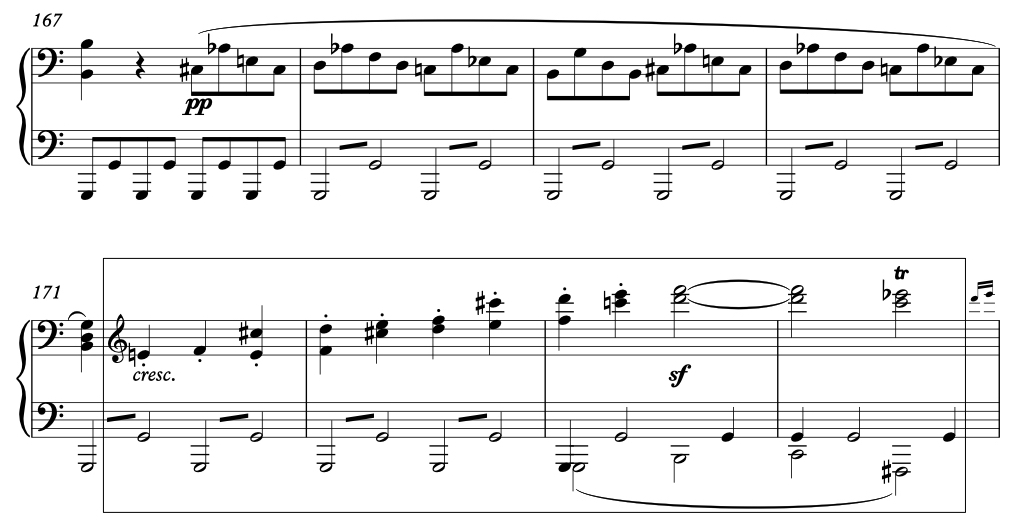 This group is the peak of this sonata as it has the widest range of notes in the development part. From mm. 187 to 194, c minor harmonic scale descends through four octaves. This is the preparation back to the recapitulation part, meaning return to the original key. 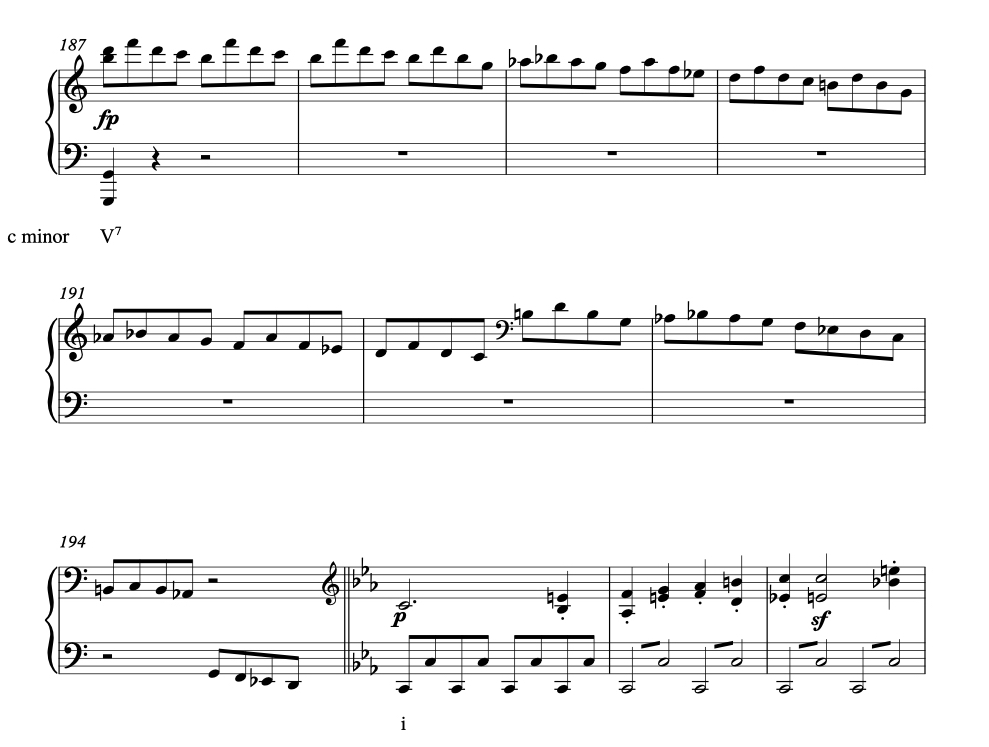 This part is pretty similar to the original form, but the second subject is in the subdominant key, f minor. The first subject is recapitulated at mm. 195 in c minor. 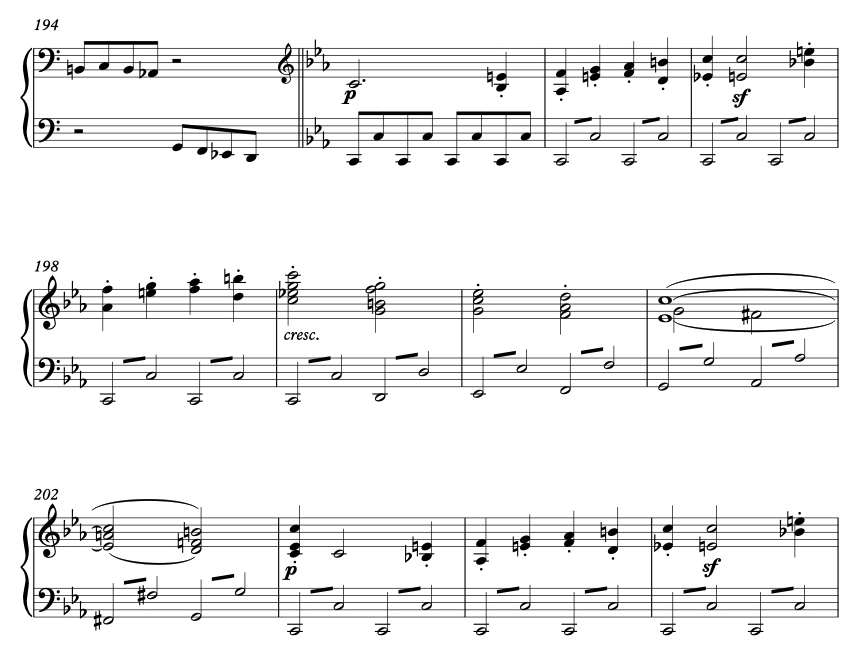 The lower voice makes stepwise motions and the key changes from c minor to eb minor to f minor as the first subject is used for the sequential modulation. 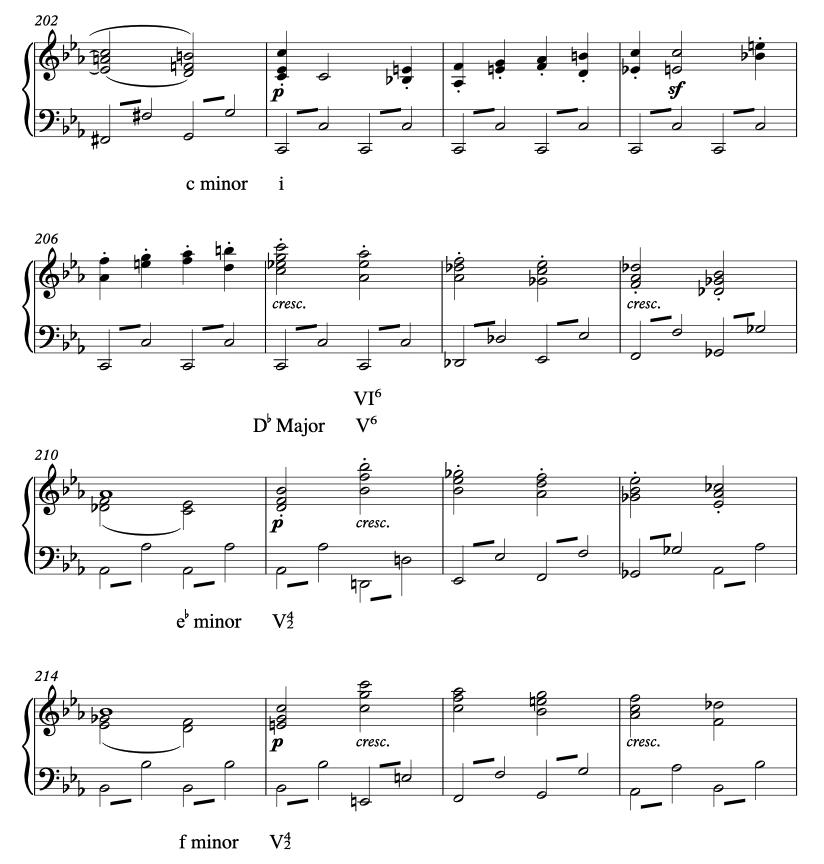 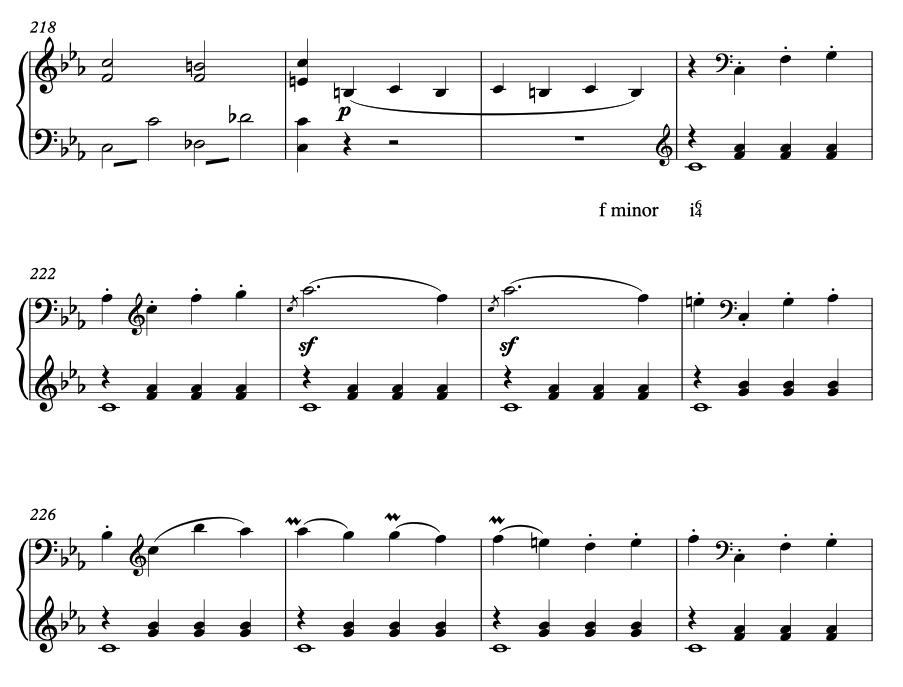 From mm. 229, the passage begins in f minor key and modulates to the original c minor via diatonic modulation. 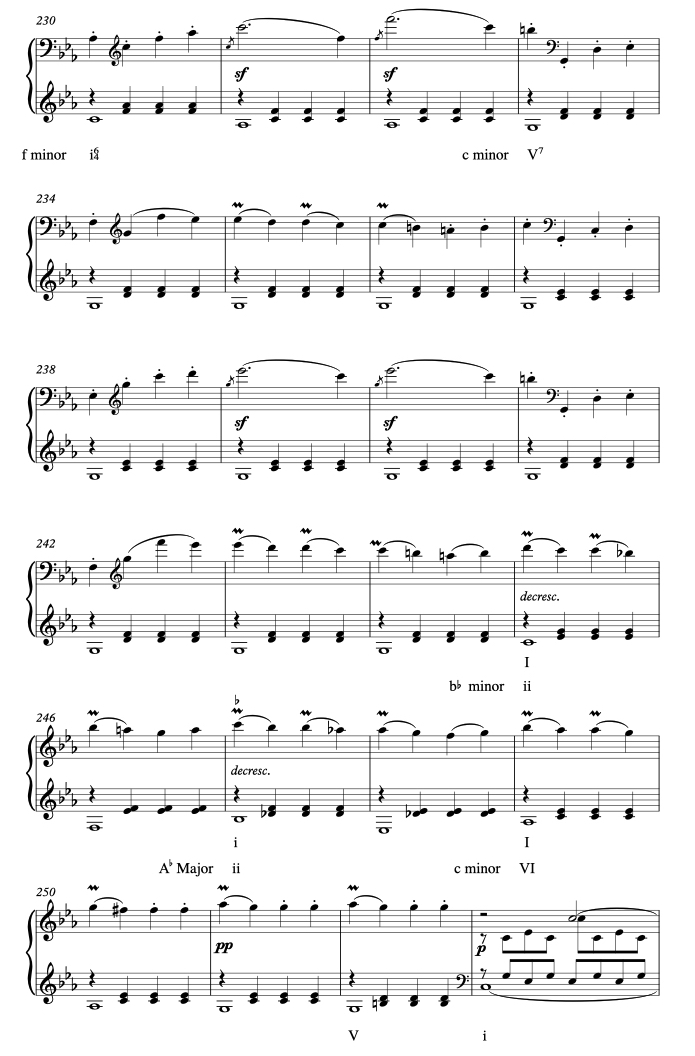 The recapitulation of transition is from mm. 253 to 276, and its key is c minor. Chromatically ascending upper voice and descending lower voice makes contrasting balance. 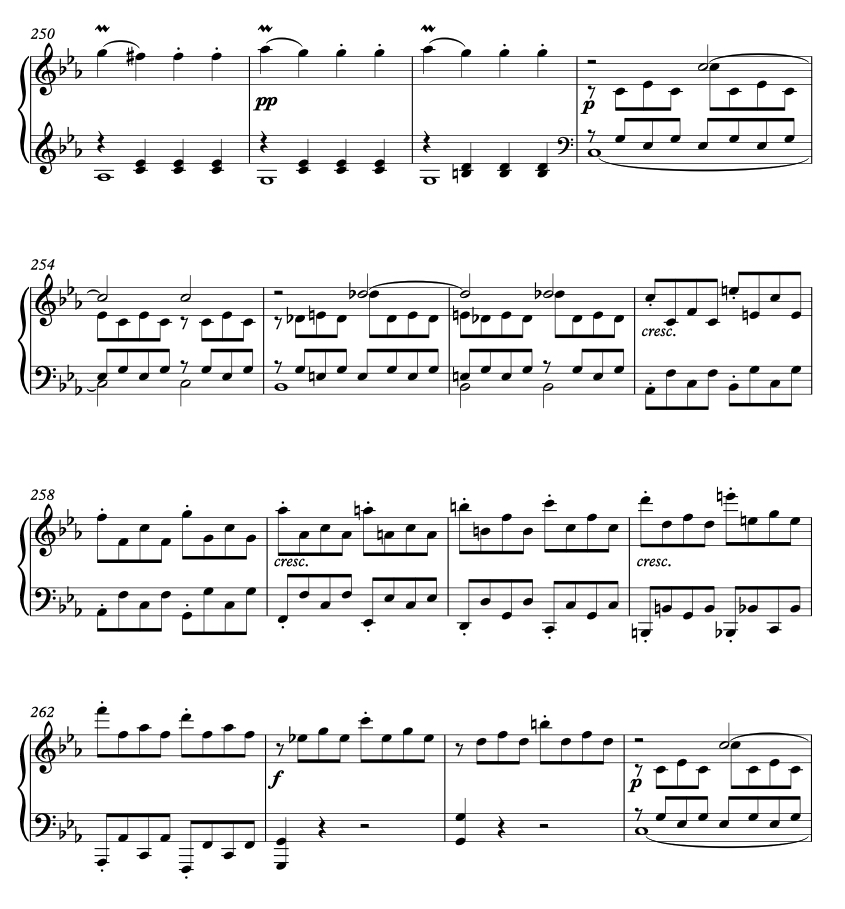 Coda begins with Grave like the introduction, and became faster from mm. 299 by changing the tempo to Allegro molto e con brio. As the first chord of the introduction is omitted, it gives softer feeling. 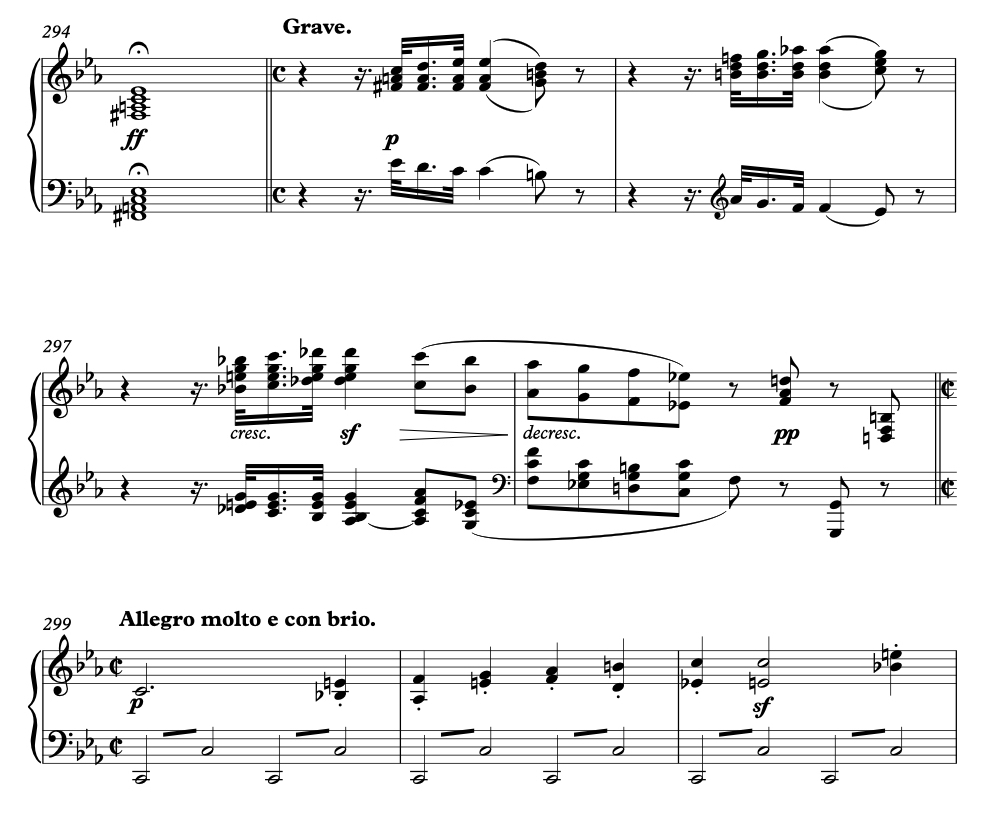 At the very last passage, Beethoven uses his signature, a full chord with a beat in each measure, to finalize with strong impression. 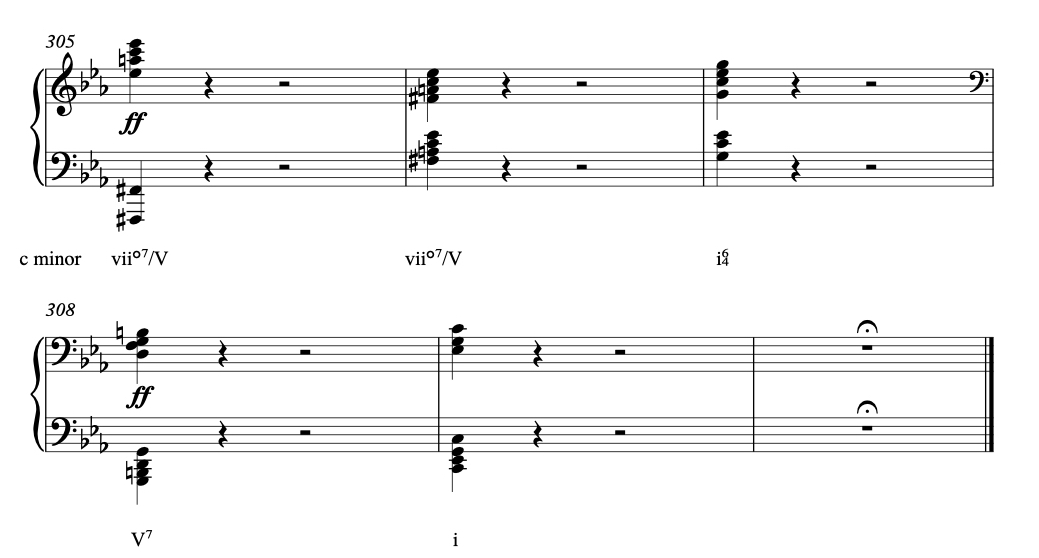